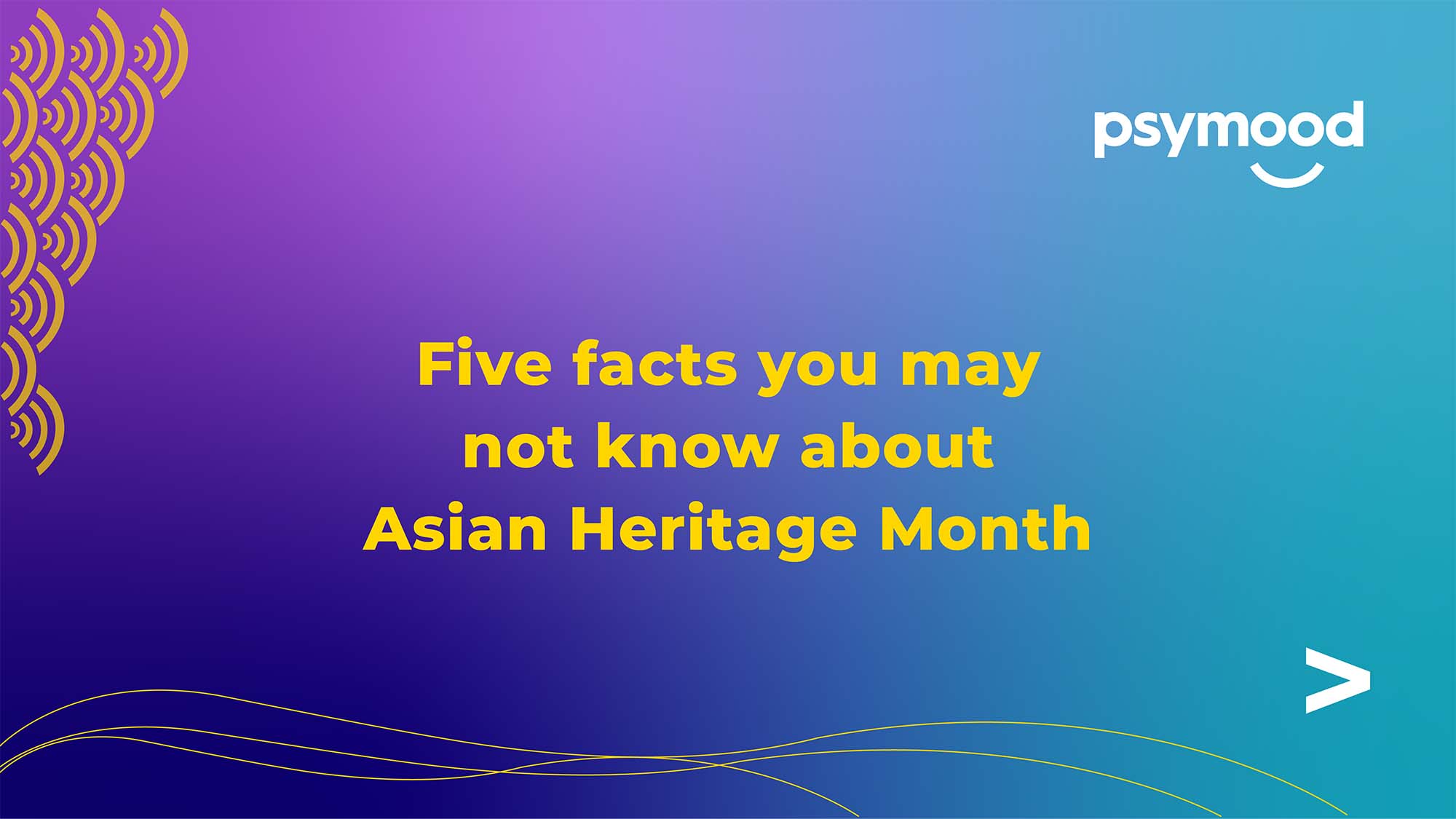 Five facts you may not know about Asian Heritage Month

May marked Asian Heritage Month and at PsyMood we are extremely proud to have a team of staff as well as mental health specialists from all over the world, including Asia, that reflect our passion for culture and diversity when providing mental health support. To commemorate the special month we have had we wanted to share five facts you may not know about Asian Heritage Month and Asian culture, in particular the amazing impact it has had in Canada to this day.

Although Asian culture has been embedded within Canadian history for decades through generations of immigrants from all over Asia calling Canada their new home, Asian Heritage Month only began as an official celebration in the 1990’s. The campaign was introduced to celebrate the diversity of culture in Canada from Asia and educate those living in Canada about the rich Asian history that can be seen across the country.

Did you know that over six million people living in Canada as of 2021 reported having Asian heritage, making up over 17% of the population of the country in total. British Columbia is reported to have the largest number of Asian communities and this is celebrated through the beautiful cultural artefacts we can see around the province such as Victoria’s Chinatown, which is the oldest Chinatown in the country.

Canada is becoming increasingly known as a cultural melting pot and within that demographic includes over 50 nationalities across Asia where populations have relocated to Canada and now enjoy joint Asian-Canadian heritage. From Turkish to Sri Lankan, Goan to Tibetan, we can be proud to be a place so many feel welcome to call home and share their cultures for generations to come, embedding themselves into the rich tapestry of new age Canadian culture.

Some of the most notable figures in recent years that have stood on a global stage to represent Canada have been of both Asian and Canadian descent. Just some to name include Adrienne Clarkson, from Hong Kong, was the 26th Governor General of Canada and BC born Larry Kwong, who became the first hockey player of Asian descent in the NHL.

As part of a particular culture, it can be difficult to talk to someone when it comes to mental health. Whether that is due to traditional historic cultural stigmas surrounding mental health or due to a lack of professionals that can understand your cultural background.

However, at PsyMood, you are able to speak to a mental health professional that speaks your native language of choice as well as someone that comes from your cultural background and therefore understands your life experiences from the perspective of your culture. We have over 350 specialists from around the world here to assist you. You can contact one of our specialists for a FREE 15-minute intake session today!

At PsyMood we are always ready to listen after a new diagnosis. We have over 350 specialists from around the world here to assist you. Contact one of our specialists for a FREE 15-minute intake session today and speak to someone from your cultural background that speaks your native language. Join today to start your mental health journey!