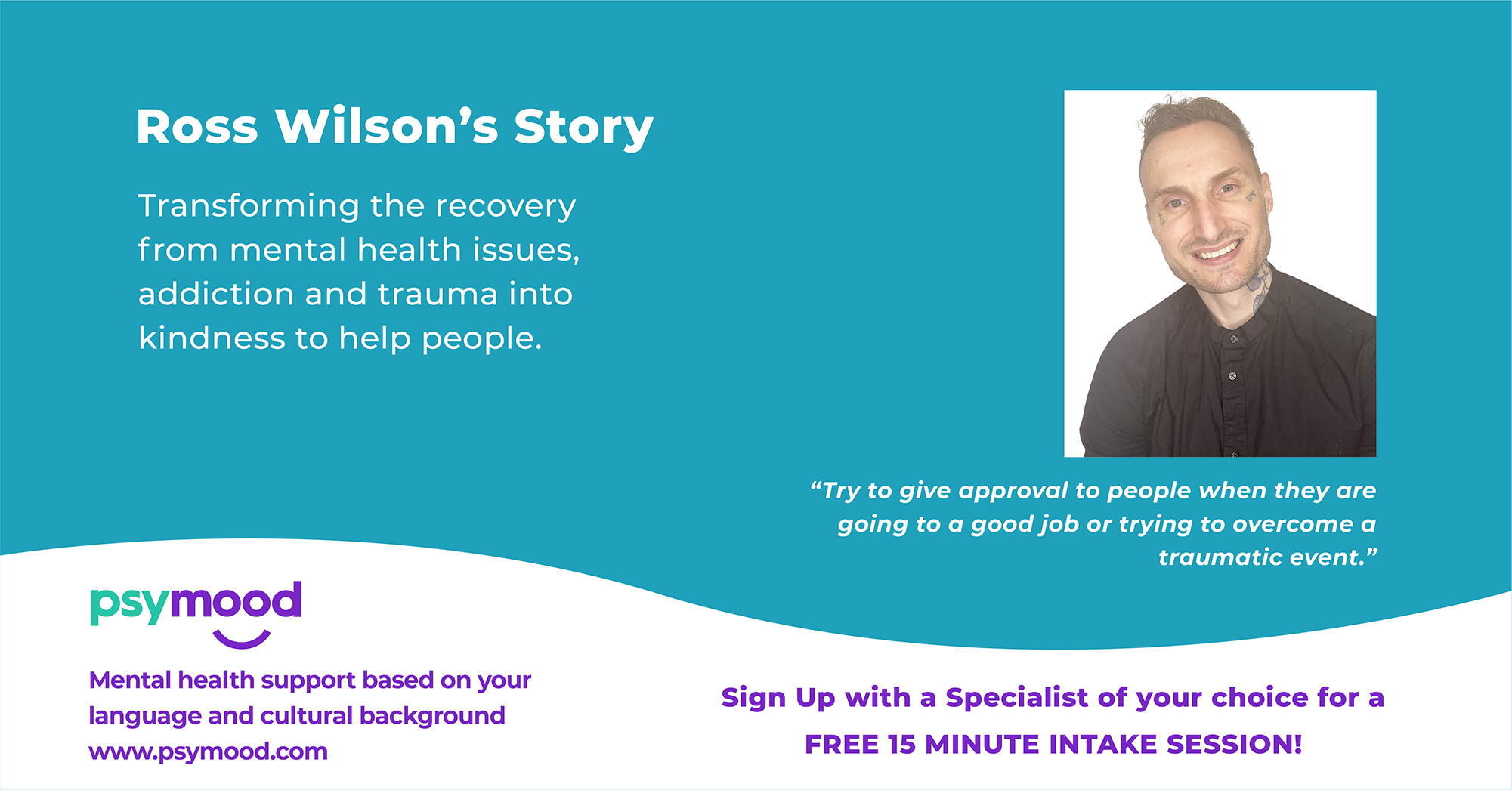 Transforming the recovery from Mental Health issues, Addiction and Trauma into Kindness to help people.

At PsyMood, we believe in celebrating individuals’ mental health journeys. We have an amazing group of mental health specialists on our platform that have rich histories and expertise in their respective fields. We wanted to share some of their stories and experiences, to bring awareness and hope to those needing support.

This week, we spoke with Ross Wilson, an ordained chaplain specializing in psychological first aid and end of life support.

From an early age, he suffered from a multitude of mental health issues such as ADHD and PTSD. He also struggles with a learning disability (dyslexia), and therefore had a hard time staying focused in school.  The stigma of mental health followed him around through school and work life. “I used it as an excuse to not follow through with goals. It ultimately worked as an anchor and weighed me down. I also struggled with addiction issues at the time” Ross said.

The moment of change for Ross began when his mother was diagnosed with cancer.  With his mother in treatment, he realized he had to make a positive change and work towards meaningful actions towards his future. “I found a new meaning and new belief in using kindness as a way to help people.” He started volunteering at homeless shelters and with organizations specializing in addiction recovery.  In 2015, while volunteering at a hospice shelter, he met a man who was close to passing. “I asked him at that moment if he was afraid of passing away alone in a shelter, and he said to me, no one cared about me when I was alive, why would they care about me when I am gone?” Ross says that moment made him realize the value of dignity during passing and the importance being present for people in life and death.

After that incident, Ross became interested in theology and how that impacts one’s process of passing or the trauma due to the loss of an individual. He soon became an ordained chaplain and studied psychological first aid to help individuals and their families overcome the trauma of the passing away process.

Ross’ work has proven to be essential amidst the global pandemic. During the first lockdown, he observed that first responders and front-line workers tasked with the responsibility of helping others felt stressed and burnt out for not having support themselves. “Many of them would ask, well who is helping us?” He began to put out messages on his social media channels offering support and a listening ear to anyone who needed help. He waited outside hospitals and near first responder stations, he wanted to be present for anyone looking for help. “Why is the mental health of first responders not being talked about? They are going through more traumatic issues than the average person. We put the citizens first and the first responders and front-line workers second – but we have to provide them with support so they can overcome pain and suffering (and prevent them from taking their own lives).”

Ross’ approach is to just be present and listen. “Try to give approval to people when they are going to a good job or trying to overcome a traumatic event. Take the core value of every emotion you are feeling and take action to resolve negativity or continue positivity.”

Ross is currently working with various programs to provide psychological first aid support to first responders or front-line workers through his chaplain services. He also works with programs to support individuals in need of a dignified funeral service without extra cost to the families. “At the end of the day dignity is number one in both life and death.”

Ross is using his knowledge in the field to partner with PsyMood and help make mental health support accessible to larger groups of first responders and front-line workers.

PsyMood prides itself on providing online and affordable diverse mental health support for newcomers to Canada by matching our users to mental health specialists that  understand their culture and speak their native language. You can start your free no obligation introductory session today.

If you feel the need to talk to someone about your mental health, PsyMood is here for you. Our mental health specialists can speak your language and understand your culture. Sign up today to speak with a specialist. We offer sessions at any time, anyplace!

Talk with a specialist that understands you.  Sign up today for a free 15-minute session.